United Wholesale (Scotland) was crowned Champion of Champions at the prestigious Scottish Wholesale Achievers awards, held at the Sheraton Grand, Edinburgh, on 9 February. 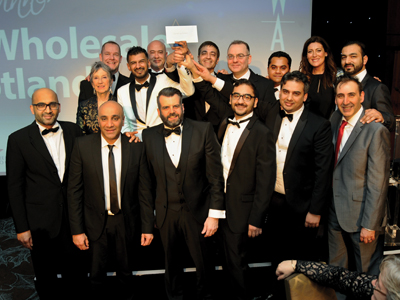 As well as claiming the ultimate prize, United Wholesale (Scotland), which operates depots at Queenslie in the east end of Glasgow, Maxwell Road in the city’s southside and M9 Cash & Carry near Grangemouth, won Best Licensed Operation, Best Marketing Initiative and Best Symbol Group. On top of that, Jason McLeod, the wholesaler’s fresh food specialist, was crowned Employee of the Year.

Now in its 15th year, Achievers is run by the Scottish Wholesale Association in partnership with Cash & Carry Management and recognises excellence across all sectors of the wholesale industry in Scotland.

Kate Salmon, executive director of the SWA, commented: “I am proud of the way Achievers has evolved – every single year we have acted on constructive criticism to ensure that the awards remain meaningful and beneficial to all involved.

“A key part of this is consulting with leading wholesalers and suppliers to make sure that all elements of the judging are aligned to identify best practice within the industry, with criteria that is not only relevant but also bang up to date. I am extremely grateful to our suppliers for their contribution.

“Fairness is paramount to Achievers. Although our awards have evolved over the years, what has remained consistent is our integrity, our uncompromising standards and our incredibly high values. We will continue to build on this in partnership with entrants, supplier sponsors and independent judges.”

Champion of Champions, sponsored by Cott

Highly Commended: Fáilte Foods for the launch of its click & collect service plus its customer and digital interaction

Employee of the Year, sponsored by Britvic Soft Drinks

AG Barr for the relaunch of Irn-Bru

Runner-up: Innis & Gunn for its project to support the launch of its craft lager in 500ml cans

Highly Commended: Lucozade Ribena Suntory for its initiative to deliver a better service to delivered wholesalers

Supplier Sales Executive of the Year, sponsored by Sugro