United Wholesale Scotland unveils its ‘warehouse of the future’

United Wholesale Scotland has always prided itself on pushing the boundaries and now, with the relaunch of its Queenslie depot, it is claiming another industry first. Kirsti Sharratt reports. 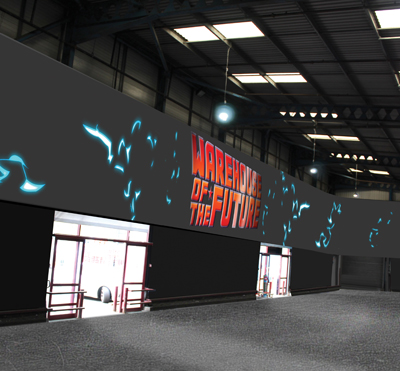 High-tech, innovative and interactive – that’s United Wholesale Scotland’s ‘Warehouse of the Future’, a new concept in cash & carry that is the brainchild of executive chairman Asim Sarwar.

The Glasgow-based operator, whose strapline is ‘We Lead, Others Follow’, has long been known for its bold and often controversial marketing campaigns, but this time it is transforming the very nature of its cash & carry operation.

“We always want to be the best and we always want to do things differently,” comments Sarwar, who became executive chairman earlier this year after appointing former Scotfresh and Booker executive Chris Gallacher as managing director. “Our aim is to try to make what is a fairly mundane task – calling at a cash & carry – a little bit more interesting, give it more oomph.”

The £235 million turnover business, which employs 270 staff and has three branches in the city (Queenslie, Maxwell Road and Grangemouth), has relaunched its flagship 170,000 sq ft Queenslie depot at a cost of more than £1 million to give customers an enhanced shopping process.

The warehouse now has more aisles and bays and the tobacco room is double the size. Huge LED displays – including a 48m x 4m screen in the foyer – feature products, promotions and messages (even individual ‘Happy Birthday’ greetings) to grab customers’ attention. The rack-ends are also now LED, there are electronic shelf-edge displays, and a Scan & Go operation is in place at the checkouts. 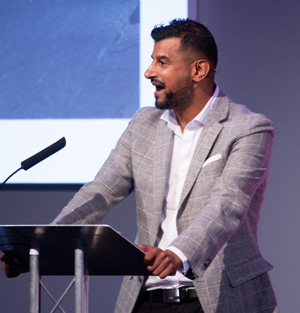 This is all state-of-the-art, but what makes UWS Queenslie the ‘Warehouse of the Future’ is the personalised customer experience – and this is where the United Connect app, an upgraded version of the company’s existing retailer app, comes into play.

Of UWS’s 2,700 customers, who include 250 Day-Today and 225 U-Save symbol retailers, 20% already have the retailer app. Significant take-up of the upgraded app is anticipated, to the point where 80% of all customers are expected to be connected within a year.

The app facilitates a more interactive shopping journey, beginning in the retail store. A new shopping list feature means that retailers can scan products before they leave for the cash & carry. Then, the moment they walk into the depot, they are connected to UWS’s system.

The customers are directed through the aisles via the most efficient route to get to all the products on their list. Every SKU has in front of it an electronic price display on a rectangular screen, replacing the previous printed version. The label starts flashing next to individual products on the shopping list, helping the retailers to find what they are looking for.

“These electronic shelf-edge displays will be more efficient, less prone to mistakes, save labour costs and – like the LED displays – create a wow factor,” says Sarwar. “Customers will be able to instantly spot a product on promotion because the screen for that product will be glowing red.” 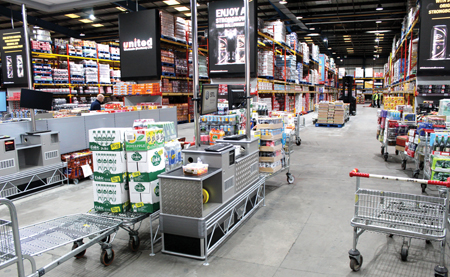 In recognition that one of the most time-consuming and frustrating parts of a retailer’s shop is the queue for the checkouts, UWS has introduced a Scan & Go operation. This entails customers scanning their purchases with their mobile phone as they wander around the aisles, filling their trolleys, and when they arrive at the checkout, UWS zaps the QR code on their phone and their invoice is created in seconds.

To encourage further customer interaction, a feedback system has been introduced, whereby customers can leave a comment or even a selfie, which can appear on any one of the LED displays in the depot.

Commenting on the ‘Warehouse of the Future’ concept, Sarwar says: “Cash & carries haven’t really changed that much over the years. We’ve evolved as a sector into distribution and retail symbol clubs, but the traditional way our retailers do their cash & carry shopping has remained pretty much the same.

“That’s why we wanted to re-set the bar, to cause a bit of a stir in the wholesale world. We wanted to create a better shopping experience for our customers – to save them time in the cash & carry whilst also educating and influencing them to get the most out of their visit.”

UWS has been working with US company Velocity Worldwide, whose Darius software collates data on every one of UWS’s customers – what he buys, when, and how frequently.

“This allows us to categorise our customers any way we want – by gender, age, customer type, etc. It also identifies what a particular customer doesn’t buy, specifically which of the core range for his type of business he’s not buying from us, or even possibly not buying at all. This is where it starts to get very interesting,” says Sarwar.

“The customer has walked into our depot and – through his mobile and the United Connect app – we’ve tagged him, and we have beacons throughout the depot tracking his movements. 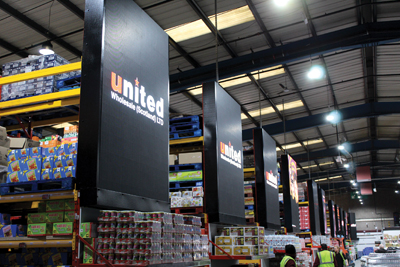 “When we add in the Darius software we have the ability to create campaigns for suppliers as well as to tailor them depending on how we tag the retailer. The tag identifies him as being within a specific group – licensed, grocery only, discounter, symbol store or whatever – so we only focus on products that he’s going to be interested in buying.

“Let’s say he buys a lot of energy drinks. We would know that from his data. We also know that Coke and Irn-Bru have recently launched their own energy drinks, so we can tailor-make campaigns via push notifications on the customer’s app.”

Push notifications can also be used to promote core-range products, such as Unitas ‘Plan For Profit’ lines, that the customer isn’t currently buying. He can be told that a particular SKU is a best-seller and offered a discount to persuade him to purchase the item.

“You might be thinking that, with all these ‘dings’ from the phone notifications, the cash & carry will sound like an international airport on speed; you might be thinking that our system wouldn’t be able to cope but, rest assured, it can,” says Sarwar, who adds that back-up generators will provide power if the main source fails at any point. 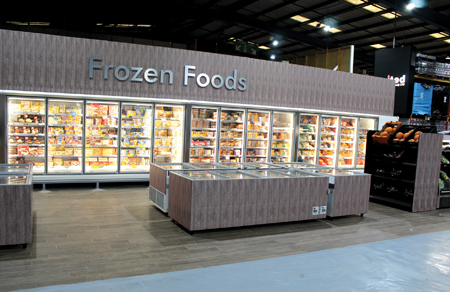 To support all of its new initiatives, UWS has centralised the buying operation at the Queenslie site – which boasts new offices – rather than having buyers at each branch. All of the senior managers are now based at Queenslie too.

UWS’s innovation in improving the retailer experience is being followed by a focus on the end consumer. “This is equally exciting,” insists Sarwar. “The same functionality we have in the United Connect app we’ll have in our Day-Today and U-Save consumer apps. So we’ll be able to tag and classify these consumers by gender, age and what they buy or don’t buy, and we’ll have the ability to tailor-make campaigns depending on the individual.”

In conclusion, Sarwar says: “I’ve always been of the view that domination emerges from the accumulation of small advantages. What we’re doing here takes it to a whole new level.”

Low-key may not be Sarwar’s style, but neither are his achievements – since he became head of the business in 2007, United Wholesale Scotland has seen double-digit growth year on year. Time will tell whether his ‘Warehouse of the Future’ will become the new best-practice model for cash & carry, emulated by competitors nationwide. There are many in the industry who wouldn’t bet against it.